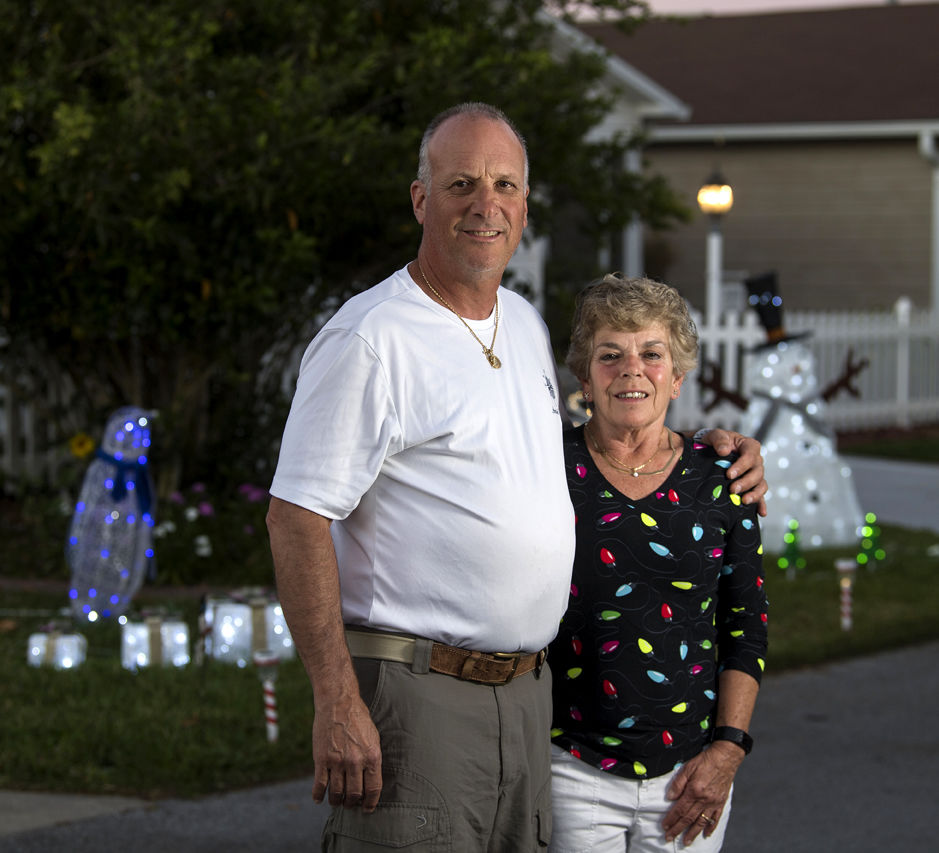 Vincent Patterson and his wife Kathy recently put up their Christmas lights at their Village of Summerhill home to help bring some cheer to their neighborhood. 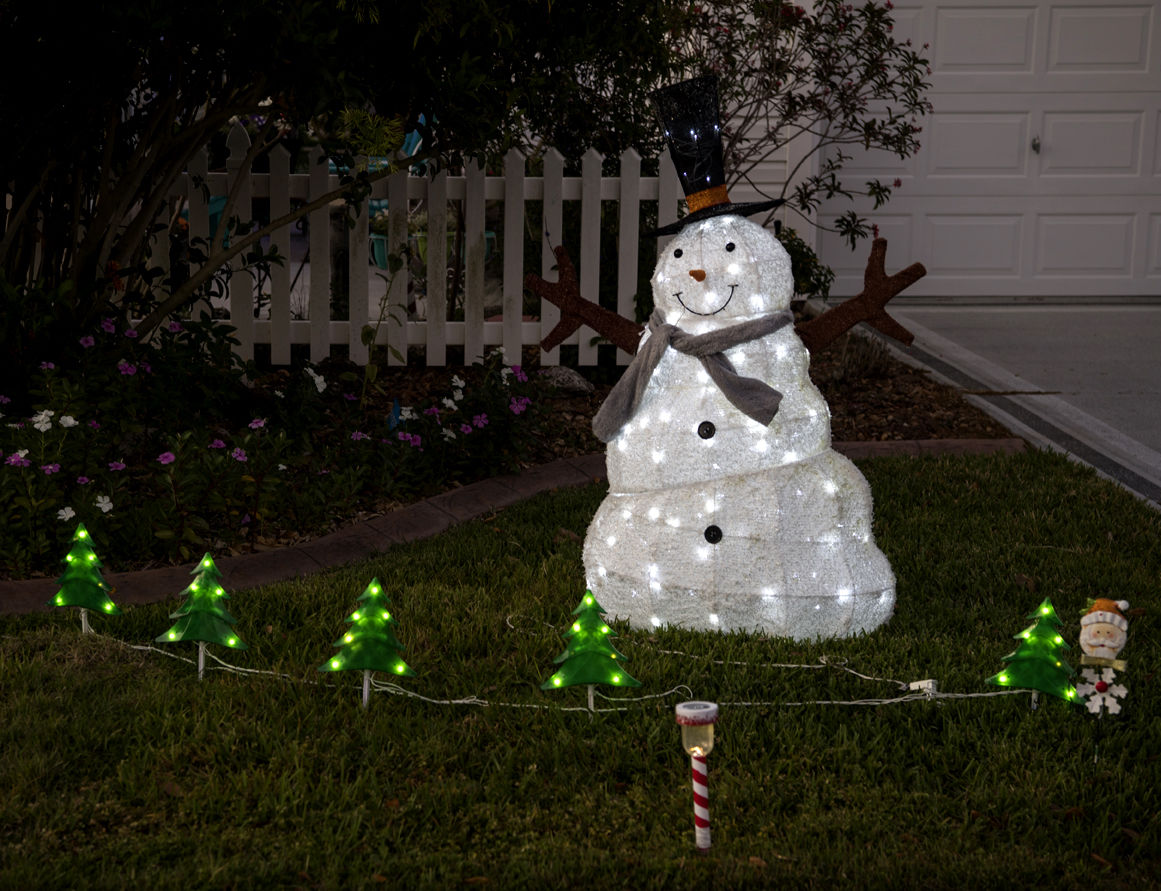 A snowman greets passersby after Vincent Patterson and his wife Kathy recently put up their Christmas lights at their Village of Summerhill home to help bring some cheer to their neighborhood.

Vincent Patterson and his wife Kathy recently put up their Christmas lights at their Village of Summerhill home to help bring some cheer to their neighborhood.

A snowman greets passersby after Vincent Patterson and his wife Kathy recently put up their Christmas lights at their Village of Summerhill home to help bring some cheer to their neighborhood.

The time it took for Kathi Casamasima and Vincent Patterson to put up their Christmas decorations was equal to “one margarita,” Patterson said.

Casamasima and Patterson decided to turn their home into a holiday haven on Thursday after playing recorded Hallmark Channel Christmas specials.

First they were inspired to make Christmas cookies, then they thought to include their neighbors in the cheer by lighting up a holiday display in their front yard.

“It’s a hard time for everybody,” Casamasima said. “It’s kind of like 9/11 when Americans banded together and did everything they could. That’s really important.”

The couple dug some holiday decorations out of their shed, such as a light up snowman, reindeer and penguins. Dolly Parton Christmas music boomed from their stereo as they filled their front yard with a mid-March holiday display.

They felt it was important to brighten up their neighbors’ mood because the two can sense worry from everyone they know right now.

The neighbors seem to love it based on their responses when they walk or drive by, Casamasima said.

“One guy did a double take,” Patterson said. “Two ladies walked by and said ‘That’s so nice’ and said ‘Merry Christmas.’”

While the couple wasn’t expecting so much reaction to their front yard decorating work, they’re pleased it makes people feel good, which was their intent.

Patterson said the two will keep up the display as long as it takes for things to slow down and resume some normalcy.

He said making people feel good is meaningful to him and there doesn’t need to be a big gesture to put people in a good mood.

“Everybody seems like they’re worried about everything,” he said. “It’s just something small.”

Fenney Springs Nature Trail: To occupy their time, some residents recently are exploring parts of The Villages they haven’t yet seen.

Julie and Lyle Berger took a trip from their home in the Village of Bridgeport at Miona Shores to the southern end of the community on Thursday to explore the Fenney Springs Nature Trail for the first time.

“That’s one of the reasons we haven’t been (down there) too often, because it’s quite a few miles (away). But right now a ride in the car is getting out,” Julie said.

Having explored a few different trails that day, Julie said the Fenney Springs Nature Trail was her favorite.

Located behind Fenney Recreation Center, the trail loops around a natural spring and features wildlife and wetland vegetation.

“I loved the springs and how clear the water is,” Julie said. “When you look a the spring, it looks like fish swimming but it’s the spring.”

Julie did indeed see fish and other wildlife such as birds and turtles. After their first visit, Julie said she and her husband would definitely be adding the trail to their weekly itinerary.

“Right now we’re trying to find something to do. We’ve been walking, we’ve been biking; we’re very lucky we have a pool of our own,” Julie said. “That’s what we’ve been trying to do to keep busy. People need to be able to get out at a time like this, not to be cooped up in your house; you go crazy.”

Oxford: Chabad Lubavitch Jewish Center of Ocala, The Villages and Tri County is using this time to provide a virtual opportunity to learn about the Jewish faith from home.

Rabbi Yossi Hecht of Chabad Lubavitch will be presenting classes and sermons today-Friday and Sunday on Facebook Live. Those interested in participating are asked to like the “Chabad House of Ocala & The Villages” page or friend “Hecht Yossi Chanie” on Facebook.

So on Sunday, Barrios connected with his fans via Facebook Live, where he performed requests and collected tips via Venmo and PayPal.

Barrios said he plans to go live again soon, and that people can stay up to date by checking his Facebook page, “Clark Barrios, Vocalist/Entertainer.”

Events being canceled and postponed has interrupted daily life for a lot of people, but it is especially difficult for self contracted and self employed entertainers, Barrios said.

“It’s definitely affecting a lot of incredible musicians, but hopefully we are able to bounce back from this quickly,” Barrios said.

Village of Hadley: The Working Writers Workshop turned to technology to keep their club going. Instead of reading their writings aloud to their peers at Canal Street Recreation Center, the writers email their work and request written comments and suggestions.

“We started doing this a couple of years ago,” said club facilitator Phil Walker, of the Village of Hadley. Usually, writers email their work and get written suggestions back in the first round. Then they revise what they wrote and bring the improved version to meeting.

They use Word software to show comments to the side of written passages, he said.

That system gives authors who hope to get their next book published the most information and feedback in the least amount of time, he said.

“All we had to do was add a second round of emails instead of the meetings, and our authors get the same benefits,” Walker said.

“When all this crisis passes, and it will, our group will continue to function,” he said.

Village of Lake Deaton: Nancy Tuccillo, of the Village of Lake Deaton, can’t teach tai chi in person since recreation centers are closed. But that isn’t stopping her from practicing tai chi to help feel better. Tuccillo said she practices tai chi on her lanai as a way to de-stress and relax. Tuccillo said she will talk with her co-instructor, Joe Casaday, on the possibility of livestreaming. “We do have a Facebook page our club members can use in the meantime,” Tuccillo said. “We have videos they can watch to lead them through.” Tuccillo said she spoke with a member from class who practices every day at home while she waits for meetings to resume.

Village of Gilchrist: Pat Santulli is keeping herself entertained while also following the rules put in place by the Centers for Disease Control and Prevention. The Village of Gilchrist resident is spending her time video chatting her family in New York. She is also calling old friends she hasn’t spoken to for awhile. When she is not checking in with her loved ones, she can be found taking her dog, a 15-year-old lab mix named Star, a ride in either her vehicle or on the golf car.

“Star is my buddy in all this,” Santulli said. “We spend a lot of time together, and I talk to her a lot throughout the day.”

Star is also there to greet the delivery person when Santulli has food or groceries delivered.

“Being partially isolated, it’s nice to be able to sit out on my porch at night and have conversations with my neighbors at a distance,” she said. “And Star loves going for a ride every day and greeting everyone we see.”

Village of Glenbrook: Bette Lou Schaum is passing the time watching TV and catching up on some games. Family members deliver her groceries, including orange sherbet for the ice cream lover who can’t have dairy. “I’m getting by,” the Village of Glenbrook resident said. “I love having quiet time at home, just me and the cats.” And Schaum said her cats, Theo and Patches, are equally grateful for her company.

The Villages: The duties haven’t really changed for Community Watch, but the ways that patrol drivers are interacting with the community has undergone a subtle shift.

Carrie Duckett, District director of resident services and communication, said Tuesday that Community Watch has enhanced its cleaning and disinfecting procedures for vehicles and gatehouses.

“Residents are used to speaking with the patrol drivers and asking questions at the gatehouses,” Duckett said. “Gate attendants and patrol drivers are really trying to practice social distancing guidelines that have been set forth and that we’re encouraging residents to practice.”

Community Watch has also taken on an additional informational aspect. Duckett said that many residents have called in to ask about closures and cancellations throughout the community. Community Watch has been fielding those questions and also providing guidance and information that comes directly from the Florida Department of Health and the CDC.

Spanish Springs Town Square: With the closure of fitness centers statewide, Mel and Mary Wilson took matters into their own hands on Monday.

The couple strolled through Spanish Springs Town Square with dumbbells, each walking along at a brisk pace with two-pound weights in hand.

“It’s a little something for us to do,” Mel said. “It’s the next best thing.”

For Mary, who flexed a pair of pastel pink dumbbells, the stroll in fresh air allowed for an escape from a news cycle swallowed by the COVID-19 pandemic.

“If there’s something you can still do together, I say get out and do it,” Mary said. “We’ve got to get away from the TV every now and then.”